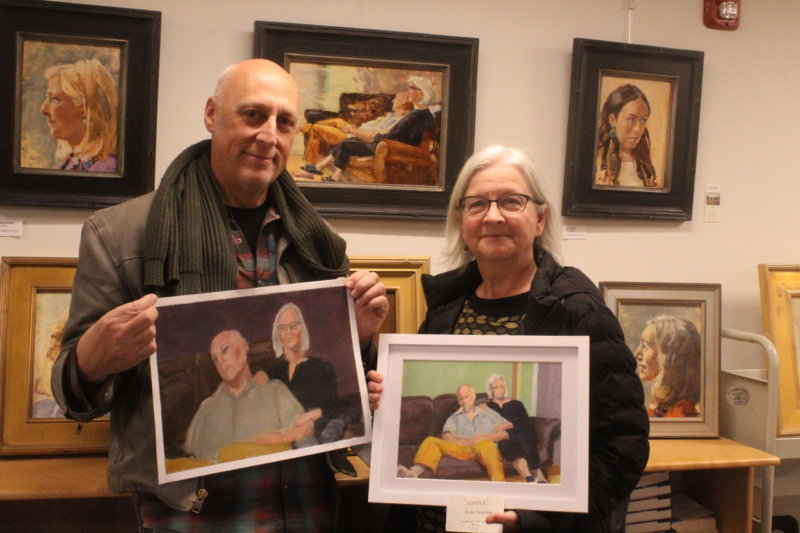 A group of musicians ended a song about how their good-looking date is going to appear, everything’s going to sound like a rhapsody and it’s all going to be different — when the songwriter paints his masterpiece.

After the performance of Bob Dylan’s “When I Paint My Masterpiece” at a Sunday reception for an art exhibit at the Charlotte Library, singer Duker Bower noted how the lyrics where something many of those in attendance could relate to. Photo by Scooter MacMillan. From left, Robin Reid, Duker Bower, Heather Bower and Daryl Quisto (who is not pictured) entertained at a reception on Sunday afternoon for a new art exhibit at the Charlotte Library.

These gatherings have been going on for about 20 years, said Buker, who, coincidentally, originated the artist gatherings at his Inn At Charlotte on Mt. Philo Road.

The gathering location has changed several times over the years. When Buker became tired of scheduling a different model each week for the artists’ inspiration, it moved to Vergennes and then it moved to Shelburne.

When Bates became the host, it initially was at her home on Thompson’s Point, but when she moved to Mt. Philo Road, the gathering competed the circle, moving with her and back to the road where it started.

“We shall not cease from exploration, and the end of all our exploring will be to arrive where we started,” said T.S. Eliot. That seems fitting as well. Photo by Scooter MacMillan.
Tom Marrinson and Allison Beach hold two different versions of themselves and a third hangs behind and between them on the wall at the Charlotte Library art exhibit.

Every week there is a model from the community, who, sits for four hours while the artists explore ways to recreate their image as a painting or drawing. In the early days there was some sculpting, Buker said, but that died out.

Bates said earlier there had been some nude models, but that has died out as well. One reason, she said, is that nude paintings don’t sell well. In Vermont, landscape paintings are popular. That also seems fitting.

Another reason for not having unclothed models is that Bates is tired of nudes. When she was a student, she painted so many nude models at The Art Students League in New York that she’s had enough of it.

The reception at the library was interesting because many of the people whose images hung on the walls were in the crowd. Clothed.

And it was a crowd. The event was very well attended.

Instead of Andy Warhol’s 15-minutes of world fame, the subjects of the portraits at the library will get a month and a half of Charlotte fame, until the exhibit comes down at the end of December. The group keeps an email list of artists and of models. Each week Bates sends an email to artists to see who’s interested. The group is limited to 12 and it costs $15.

It is not a money-making venture. The goal is just to have enough money to pay the models. If money starts to accumulate in the envelope where they keep their funds, they reduce the cost a couple of bucks for a few weeks.

The models enjoy it. They get paid $80 for four hours of being still on a Thursday afternoon. The models come from both ends of the age range; it appeals to older people and high school students who like getting paid for doing nothing except looking interesting.