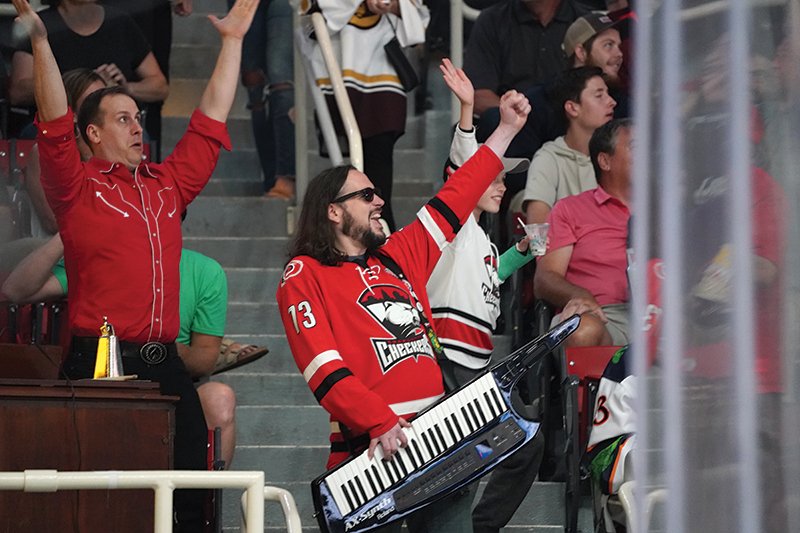 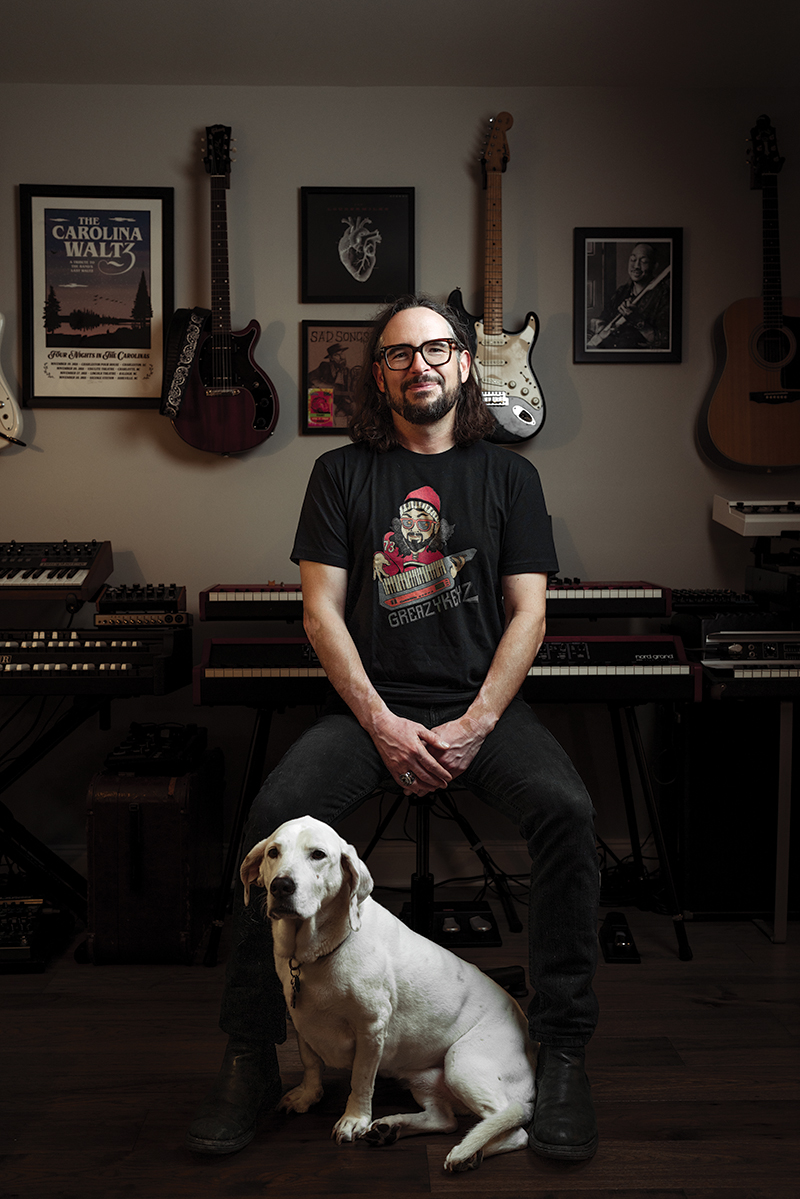 Jason Atkins was a kid in Greenville, South Carolina, when his dad brought home a 1920s piano. A local bar was getting rid of it. Most of the keytops were broken, Atkins says, and it “was forever a half-step out of tune.” But occasionally, Atkins’ mom would take a seat and play “Heart and Soul.” When Atkins was around 10, he copied her and picked up the song entirely by ear. He’s played piano and other keyboard instruments ever since, everywhere you can imagine.

Atkins, 44, is a full-time professional keyboardist who goes by the stage name “Greazy Keyz.” Since he moved to Charlotte in 1997, he’s played in more than 100 local bands and on 1,000 recorded songs. But Greazy Keyz is best known for his organ work at minor-league hockey and baseball games. The Charlotte Checkers hired him in 2015, the Kannapolis Cannon Ballers in 2019; on game nights, you’ll find him parked with an electric organ on the Bojangles Coliseum or Atrium Health Ballpark concourse. From there, he can interact with both the game and its spectators.

When Atkins isn’t organizing at games, he’s playing other venues. On Tuesdays, he hosts Charlotte’s longest-running open mic night at Smokey Joe’s Café on Monroe Road. He has a standing Thursday gig at Bradshaw Social House in Ballantyne. He also plays weddings and corporate events with the Hot Sauce Party Band and fills in for others.

Here’s Atkins/Greazy Keyz in his own words, edited for length and clarity. 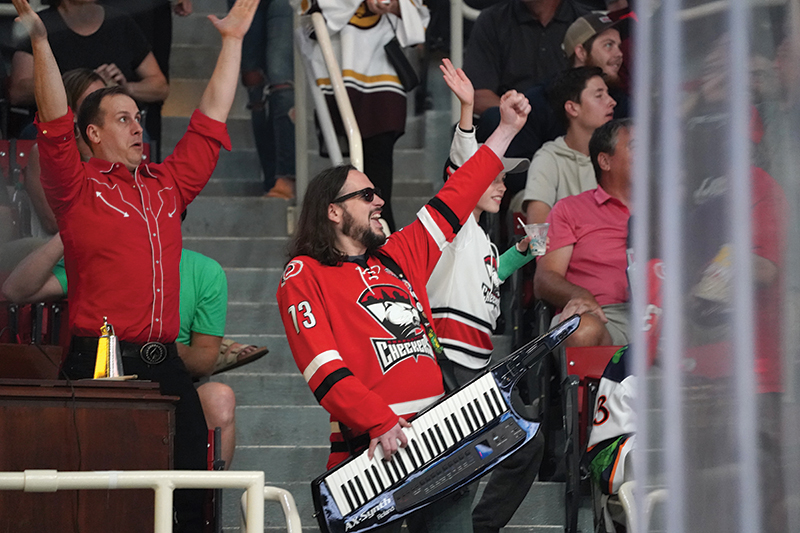 ometimes, Greazy Keyz steps away from his beloved organ and straps on a keytar. Courtesy Charlotte Checkers.

The Checkers have been involved in Charlotte as the hockey team since the late ’50s. For a time, they had moved from what is now Bojangles Coliseum to the Bobcats Arena (now Spectrum Center). Well, in 2015, the city renovated (Bojangles) Coliseum, and they moved back over there, and the executives decided they wanted to utilize the organ again, because for years, it was tradition to have an old organ. It was actually installed into the Coliseum when it was built back in the ’50s, and for years and years and years, there was this little old lady who played organ at the Checkers games. [Ed.: Doris Morgan was a lifelong musician who played the organ for the Charlotte Checkers—originally called the Charlotte Clippers—from 1957 until 2003. She died at 96 in 2021.]

I got the call to audition for the Checkers in 2015. I showed up for the audition and, luckily—you know, as a keyboard player, there’s the geeky side of being into different keyboards and equipment. I’ve always been into vintage keyboards—so I walked into the audition, and it was a Hammond C3 organ, which for keyboard players is, like, the pinnacle of keyboards. … I’d owned one as a kid after I discovered it in this little piano-organ store in Greenville. … I saved up money doing a summer job and bought it for $1,500. … So I was excited (at the audition) because I knew how to use it. It takes a little bit of a process to turn it on. It’s not just a switch. You’ve got to do these little knobs and power it on. I think I was already a shoo-in at that point, but I played a little bit for them, and they really, really liked what I did. I started that season, and that was sort of the birth of Greazy Keyz.

I used “Greazy Keyz” as an email ad­­dress for years: greazykeyz@yahoo.com. It was something different besides just JasonAtkins12345. Music friends had kind of been calling me Greazy Keyz, or Greazy, just because of the email. Then, when I joined the Checkers, they go, “Hey, you’ll have a jersey. Do you have any fun nicknames to put on it?” And I’m like, “Well, Greazy Keyz.”

When you think of an organ, you think of, like, the church pipe organ. Very staunch, very solemn sounding. … But the Hammond organ was developed in the ’30s as an electronic replacement for the pipe organ. In the ’50s, and probably late ’40s, jazz players started to use them. So then you would hear it in early jazz recordings, and then it kind of morphed into being used for rock, and then gospel music. In a lot of Black gospel music, the Hammond organ is the instrument that you hear. Whether you know it or not, it’s even used today in a lot of pop records. But it probably hit the peak of its popularity back in the ’60s and ’70s. Everyone from The Allman Brothers Band, any major pop or rock band you can think of. Once you have or play a Hammond organ, you’re sort of established as a keyboard player. So the fact that the city of Charlotte owns one in the Coliseum, and I get to show up and play it, is an honor.

In 2019-2020, the Cannon Ballers … wanted to bring a live organist there. The GM, Matt Millward, used to be with the Charlotte Knights, and when he took over the position of general manager for the Cannon Ballers, he was like, “I want to have a live organist.” And I was the one that they found. I was already in the sports organ business. And it lined up perfectly because with the hockey season and the baseball season, pretty much one ends and the other one picks up. So I couldn’t say no to the opportunity. And there’s been a lot of great crossover with fans. 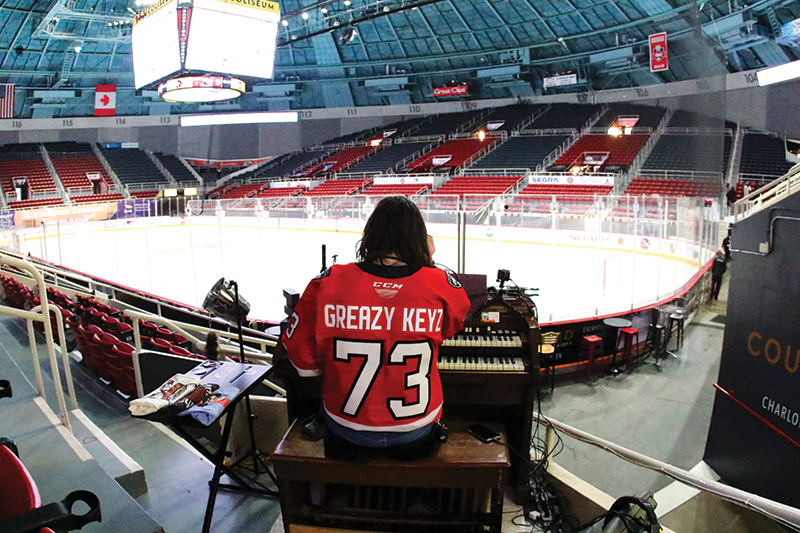 He first deployed it during a five-overtime Checkers loss during the Calder Cup playoffs in 2018. Today, he pulls it out only for playoff and Saturday games. Courtesy Charlotte Checkers.

I’m actually not really a sports fan. I’m a straight-up music guy. I had been to a few sporting events over the years. I had been to Checkers games before, when I was invited by friends and things. And it’s fun in the moment, but I never really was watching it on TV or anything. But being with the Checkers and getting to know some of the players over the years, I’ve developed friendships and relationships with some of them, so I follow them, primarily on Twitter, and kind of see where they’ve grown and stuff like that. It’s definitely broadened my horizons there. And now with baseball. And one year, I got to be the organist for the Charlotte Hornets, too. [Ed.: The Hornets hired Atkins to play at one game a month during its 30th anniversary season in 2018-2019.]

I’ve really just embraced the position of a team ambassador. Of course, the Checkers have Chubby, and the Cannon Ballers have Boomer, the mascots. Those are the main draws, outside of the game. You can high-five Boomer, and you can hug Chubby, but you can’t really talk to them. Whereas with Greazy Keyz—what’s great is, for both teams, they have me in very accessible locations. I’m not stuck up in a press box somewhere. That’s really what has made it so awesome for me and for the fans. It helps grow the persona of Greazy Keyz because people can come up and interact with me, request songs, have conversations with me, talk about the organ, things like that. The persona I try to be is always open and welcoming, encouraging to young kids. Maybe they’re inspired little musicians. And I’m like, “Hey, come early to the game and sit down to the organ.” I’ve had that happen a couple of times over the years. To have that sort of positive influence on kids has been probably one of the coolest things.

With both sports, the doors open an hour before the game, and I get to go out and play. I’ll have like a 30-to-40-minute set of music. I get to play whatever I want. I’ll do everything from old-school R&B to classic rock, maybe some pop—something that’s hot, like some Harry Styles.  And it’s fun because people will come up like, “Oh my gosh, I’ve never heard that on organ before!” … During the games, I’m always looking for hooks—melodic hooks or music hooks—that people can instantly recognize. To me, that’s the fun part and the challenge that kind of keeps me on my toes: kinda vibin’ the energy of the crowd and the game. If our team’s winning, I’ll play a certain set of songs with a certain energy, or if we’re behind, maybe a little bit different. I pretty much keep it all on the fly.

I do get confused for being a DJ sometimes, but I’m not. Not to say that I couldn’t be. It would be easy to do that with what I do now. But generally I just focus on playing music.

I currently have about 14 keyboards (laughs). My wife’s very supportive.

I’m just amazed at the interest that Greazy Keyz has generated. I probably don’t even really fathom how many people I’ve touched through that. And I don’t take it for granted. I feel very honored to have this platform and to be a positive influence on people, whether it’s in sports or in music. … I love being that guy—being in the know and part of the larger music community. Charlotte’s not known for a huge (music) community, but there’s a lot of little niches, and I’m proud to say that I’m kind of a part of all of them.

TESS ALLEN is the associate editor.